The idea was gathering all the Peruvian GNOME lovers to share our experiences with GNOME throughout all the past ten years to all our viewers around the world.

Jose Quiñones (juazisco) is currently a chief in the IT area of the Health Public sector in Peru. He has been previously involved in the initiative GNOME PERU Challenge 2017-1

Fabian Orccón (cfoch) is a member of the GNOME Foundation, GSoC mentor and ex-GSoC student. He also supported GNOME Peru events such as HACKCAMP 2016.

Martin Vuelta (zodiafireworks) is a FLOSS enthusiastic person who helped me in organizing previous GNOME events such as Linux Playa,  LinuxAtUNI and PeruRumboGSoC2018.

Alex Aragón (aragcar) has been a designer for many FLOSS events I have organized for years. He participated in the LinuxCamp2012. One of the first designs he did here.

Fiorella Effio (aweba) is a Frontend developer who has also participated in several GNOME events in Peru since 2016. She wrote most of her experiences with GNOME here.

Angelou Alexander (aggalex) is a student from Greece, and our only international guest. We have met in the GUADEC 2019 and we did together a workshop at FOSSCOMM 2019.

First of all, the GNOME marketing team was informed, as well as the GNOME members through the GNOME Planet. I also documented this event in the wiki.

The event was promoted using the fan page from GNOME PERU FEST, Linux at UNI and in the fan page of Fedora Peru.

Special thanks to Maricielo Isabel Vergara Lao who designed the poster for the event.

C. Setting up the technology

We basically did a streaming on Facebook using OBS and Jitsi to present GNOME 3.36.

As it was planned, the streaming started at 9am (Peruvian time). The speakers and myself were ready on time for the transmission. However, we only saw a few of people connected. This is understandable due to time difference between UK and other parts of the world. During this quarantine time, people usually sleep late, and might wake up late to prepare their brunch around 11 am… Anyway, we officially started 9:30 a.m. (Peruvian time). 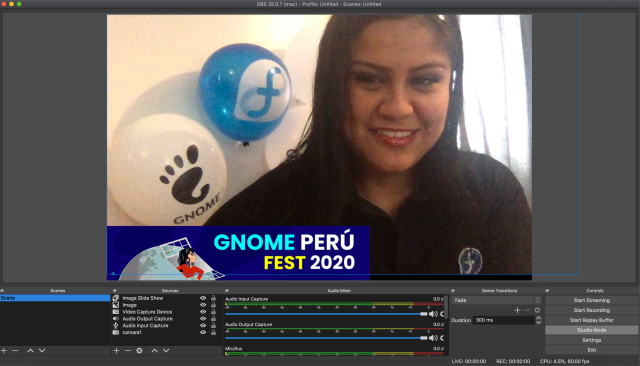 Our transmission lasted around 5 hours as it was planned. Thank to all the speakers that were connected the five hours in a raw. Fiorella Effio had prepared her GNOME on Ubuntu, but she did not do a presentation due to a technical issue. We had very few views online ranging from 9 to 25 people. Some of them expressed interested in joining GNOME.

In the UK, the event started in the afternoon and it finished at night time. I was so glad to arrange my first online event. Special thanks to Angelou for his kind help. Greece has two hours ahead UK, but Angelou was always there for the meetings with our team.

This quarantine time made me change the format of the GNOME parties I use to organize. We have celebrated the new version 3.36.1 with the usual balloons and selfies. I used cereals instead of a consistent cake.

Overall, I am satisfied and happy that new people showed interest in the GNOME project. The streaming has reached so far more than 6,500 people, and more than 1,700 views. 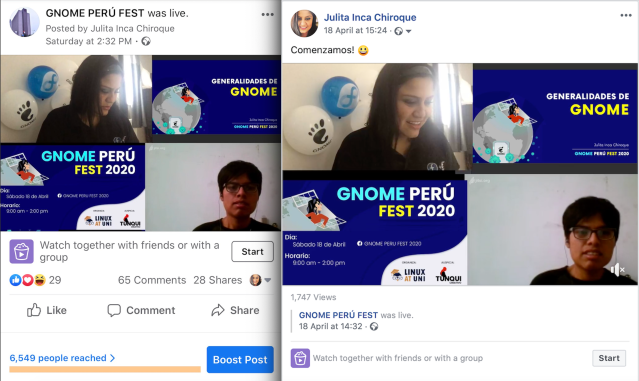 You are so welcomed to see our event here!

Thanks to all the world! #stayHome #staySafe #stayEducated